BUILDING OUT A WORLD CLASS SILVER ASSET IN CANADA 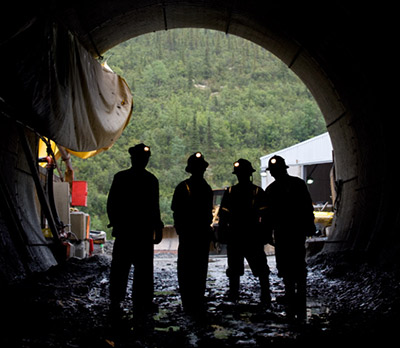 Alexco Resource Corp. is a primary silver company that provides exceptional exposure and leverage to silver in one of the safest mining jurisdictions in the world. The Company owns the Keno Hill Silver District, located in the Yukon Territory, Canada and is a proven explorer, developer, and mine operator. The Keno Hill Silver District is one of the highest-grade historic silver districts in the world, having produced more than 214 million ounces of silver at an average grade of approximately 1,373 grams per tonne (g/t) silver (44 ounces per tonne (oz/t) during the early and mid-1900’s.

On March 28, 2019, Alexco announced a positive pre-feasibility study (“PFS”) for the Keno Hill Silver District, which contemplates production of approximately 1.2 million tonnes at an average grade of approximately 805 g/t silver, 2.98% lead, and 1.13% zinc from four deposits (Bellekeno, Flame & Moth, Bermingham, and Lucky Queen). The average processing rate during the 8-year mine life is estimated at 430 tonnes per day and Keno Hill is expected to produce approximately 4 million ounces of silver annually, contained in high-quality lead and zinc concentrates.

Alexco is moving Keno Hill back towards production in a disciplined manner. In December of 2019, the Company received a new Quartz Mining License (“QML”) for the four PFS deposits. The permitting process for the new Water Use Licence (“WUL”), which will allow the Company to process ore from the four PFS deposits, is in its final stages and the Company expects that it will be issued in the first half of 2020.

In 2019, Alexco focused on construction of surface infrastructure, while completing a successful 8,300-meters surface diamond drilling campaign to test the deeper portions of the Bermingham deposit as well as new targets identified during a 2018 geophysical study. The drilling campaign intersected high-grade mineralization at depth at Bermingham and discovered a new mineralized area, the Inca vein.

Alexco is committed to the responsible and sustainable development of Keno Hill. Our culture and values drive us to achieve excellence in all that we do, while supporting the communities and organizations in the areas in which we work.