About Pogo Mine and Environment

The Pogo Gold Mine, where gold production was launched in Alaska, is our company's first overseas mine where we are taking the initiative. We were fully committed to the environment from the design stage and engaged the local residents in discussions which culminated in our receiving development permits.

Exploration at the Pogo Mine began in 1990, and gold deposits were discovered in 1994. We verified the gold quantity, obtained environmental permits then moved onto mine construction, and launched production in 2006. This was the first of many overseas mines we have invested in where we were in charge of the mine's development.

The United States is the world's leader in the introduction of environmental assessments, and Alaska has many national parks and wildlife refuges with very stringent environmental protection standards requiring 83 separate permits. We recognized that coexistence with the environment and relating to local residents were essential in the mine's development, which led us to conduct a full environmental review from the design stage. This is the only gold mine employing unique processes others cannot realize. We also held open forums with local residents to gain their understanding of the critical efforts we were making for the environment. 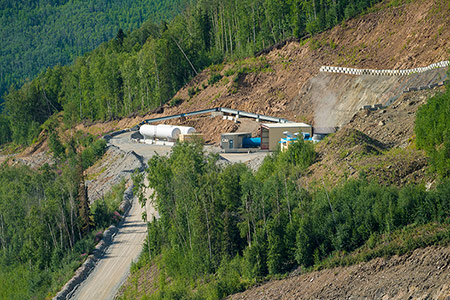 We responded to environmental concerns in the development of the Pogo Mine by minimizing its ecological impact. Preserving the rivers where salmon run and avoiding any impact on the moose's habitat were critical. This also meant preserving the fishing and hunting grounds directly linked to the lives of the native inhabitants.

For water treatment, we purified the mine sump water using a treatment plant which was then used as processed water. The discharge standards of excess water were checked before being outflowed to the river.

Toxic cyanide is needed in the gold manufacturing process, but the water coming in contact with cyanide was isolated in the process as we established a system cut off from the outside. We also performed the sorting using gravity classification then conveyed the materials to flotation where only the minimum of ore required at around 1/10 concentration was reacted with cyanide.

We did our best to avoid any impact on the moose through measures that avoided the breeding grounds when constructing access roads to the mine and not allowing their use by the general public. The access road needed to be 80 km long, but Alaska had not had a road built that was longer than 10 km for the past 20 years, so we did our best to explain the reasons for the road.

Human resources are the company's foundations. To SMM, which includes "respect for people and human rights" as one of its Six Key CSR Areas, the development of human resources is an integral part of the company's own growth process. With our sights on the CSR Vision for 2020, having learned from the Sumitomo Business Spirit what it means to work for a corporation, SMM looks to nurture human resources who are capable of operating on the world stage and who society can trust.

As implied in the expression, "A business depends on its people," human resources development is indispensable for the development of a corporation. It suffices to say that the growth of SMM has been upheld by an environment where employees work on personal advancement through their jobs, predominantly in the form of on-the-job training (OJT) involving the systematic acquisition of knowledge, skills, and techniques.

In the context of global business expansion, the key to achieving our target of becoming a major player in the non-ferrous metals industry will be to develop human resources who can make decisions in line with standards acceptable to the international community. We believe human resources who meet the expectations of society will play a vital role in realizing the CSR Vision for 2020 prescribed by the SMM Group when CSR activity was launched.

There is a growing need in this day and age for human resources capable of operating overseas, with the ability to see the big picture, and for education teaching skills and technology in order to enhance manufacturing capability. Programs are therefore reviewed once every year to ensure constant improvements to the standard of education.

With an eye to bringing management and frontline operations closer together, the president visits business facilities in person to engage in dialogue with front-line employees. In FY2009, he visited every SMM facility.

Another method for receiving feedback from employees involves the gathering of requests and opinions through a self-submission system executed in conjunction with annual interviews with immediate superiors. Under the system, employees submit a "suggestion to management." We plan to summarize these suggestions for circulation among officers.

One initiative relating to the Six Key CSR Areas, headed by the Communication Subcommittee, was the implementation in March 2010 of an employee awareness survey targeting all employees (including limited-term and nonregular employees who had worked for at least a year at the time of the survey) at workplaces under SMM's direct control.

The purpose of the survey was to find out what employees feel about the activities, culture, environment and other aspects of the company as a way to identify issues that concern them and determine the causes, then to link findings to an action plan aimed to make SMM a "good company." An outside research company was employed to carry out the survey to ensure as much objectivity as possible in ascertaining the facts, to constructively reflect expert opinions in action plans, and to enable comparisons with other companies. The response ratio was 94.6%, which is high compared to ratios generally recorded by research companies.

We now plan to provide feedback on survey findings to employees via Intranet notice boards, in-house bulletins, and other methods, and also to analyze the issues from an overall perspective, looking for example at workplace circumstances such as communication, operation, and systems, then utilize that information to formulate and implement new measures and make improvements.